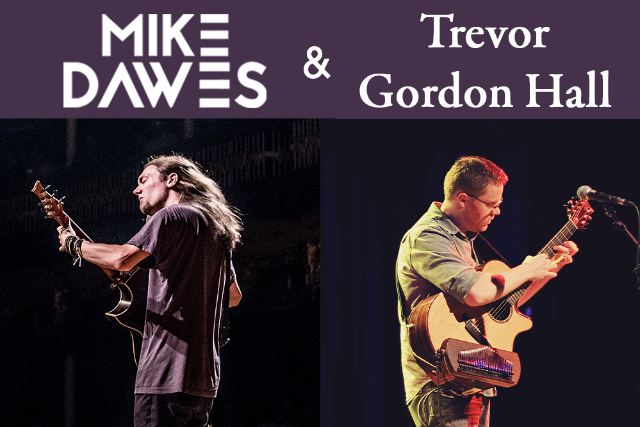 Mike Dawes (ENG) is hailed as one of the world’s finest and most creative modern fingerstyle guitar performers.
His acclaimed solo music has gained over 80 million hits on popular video sharing sites and since the release of his debut album in 2013 he has toured almost every continent on the planet, with an average of 150 concerts per year. Mike was named ‘Best Acoustic Guitarist in the World Right Now’ in both 2017 & 2018 by Total Guitar Magazine/MusicRadar.
READ MORE +

The unfolding era of the music business has provided many fresh opportunities for artists to foster direct and meaningful connections with new audiences around the globe.  Trevor Gordon Hall is a powerful emerging voice, albeit without words to his music, showing that combining honest heart felt compositions with precise technical virtuosity do not sideline an artist in today’s world but can launch a wider reach than ever before.  With an exploding presence on streaming services like Spotify, YouTube etc, a tour calendar that has taken him all over the world, it’s safe to say that this is a new era for artists like Trevor to engage listeners from all cultures, languages, genres, and backgrounds.

Rated one of the top 30 guitarists in the world under 30 years of age by Acoustic Guitar magazine, Trevor is an instrumentalist from Philadelphia USA whose style ranges from edgy driving rhythms to delicate melodic themes. Exploring the guitar’s full creative potential, his blending of sounds weave together textures into grand yet intimate and lyrical compositions. While leaving no physical aspect of the guitar untouched, Trevor navigates audiences through an igniting experience of music that isn’t just heard but felt. Aside from being featured on NPR, NBC, PBS and countless international media outlets, Trevor’s tour calendar has taken him to 14 countries and counting performing at many historic places including Carnegie Hall in NYC, Union Chapel in London, Music History Museum in Bologna, Adolfo Mejia Theater in Colombia, and more. He has also had the opportunity to share the stage with some of the most trusted and legendary names in the music business prompting high praise from John Mayer, Steve Miller, Graham Nash, Steve Hackett, Dar Williams, Will Ackerman, Pat Martino, Stanley Jordan, Phil Keaggy, Tommy Emmanuel, Andy McKee and more.

At the start of his career, Trevor caught the eye of 9 time Grammy award winning producer Joe Nicolo (James Taylor, Billy Joel, Bob Dylan, etc.), who produced two of Trevor’s releases, Finding My Way and Let Your Heart Be Light, in 2008 and 2009. Then in 2010, inspired by his studies and always on the hunt for new sounds to utilize, Trevor collaborated with various builders to design an instrument combining an African finger piano (kalimba) and an acoustic guitar.  The instrument combination, which Trevor calls the “Kalimbatar”, has opened up new possibilities for solo instrumental music.  Compositions inspired by the pairing of the two instruments were first introduced in previous releases but fully realized in Trevor’s Candyrat Records debut Entelechy.  Upon its release in 2011, this album rapidly climbed the iTunes Singer/Songwriter charts, as well as YouTube Top Commented/Top Favorited/Most Discussed categories gathering millions of views with the release of performance videos.

In the next few years leading up to his 2014 album Mind Heart Fingers, Trevor redesigned and fine-tuned the Kalimbatar with the help of master luthier Sheldon Schwartz.  Trevor recorded with his new instrument at Imaginary Road Studios in VT with Grammy winning and long time hero Will Ackerman (Founder of Windham Hill Records.)  Mind Heart Fingers was the result of a unique experience created between Will, Tom Eaton and Trevor, to capture a heart-felt recording honoring the guitar tradition which Windham Hill helped to launch, while looking forward to what is next for the guitar scene.  This project reached #4 on the ZMR international radio charts and was nominated for best instrumental acoustic album of the year by the ZMR awards.

Constantly working on new sounds and possibilities, Trevor released the first of an EP series entitled Kalimbatar Classics Vol. 1 in 2015 featuring his arrangements of classical piano standards for the Kalimbtar.  Moving from that into the electronic world in his 2016 release Late Night with Headphones Vol. 1, Trevor introduced his listeners to new sounds incorporating electric guitar and electronic textures.

Trevor is an artist on a mission to ride the line between being adventurous and accessible.  As Grammy winning Will Ackerman has said “…Trevor has a stunning range stylistically while being made cohesive by the power of Trevor’s artistic voice and vision...a guitarist we will need to pay attention to…”, and guitarist Don Ross agrees, “…Trevor has a timeless sense of melody, and he creates some of the richest sonic textures you're likely to hear from any contemporary composer/guitarist…”