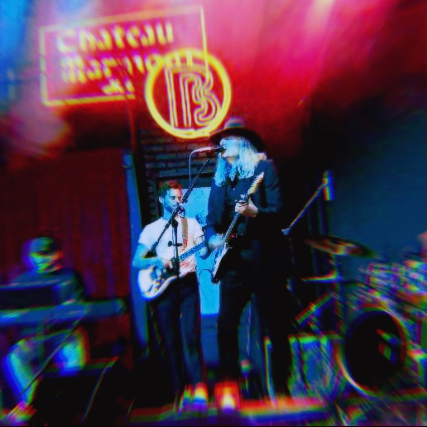 Hill County's meats are dry-rubbed and smoked low and slow over Post Oak wood imported from Texas and our sides and desserts include family recipes and new interpretations.

We stock our bars with Texas-inspired cocktails, creative margaritas, and of course American whiskeys, fine Tequilas and rotating a beer menu.

North Beach Gritty is a rock band out of the Seattle area that draws from bluesy rock, hard rock, and the evolution of hard blues into grunge and acoustic pace/story.
The band formed when novelist Joshua Braff began writing lyrics and found guitar chords for his words/poems. Josh recorded his first songs Hokey Pokey, Evolve, and Meteorite at Disher Sound and Music in the North Beach section of San Francisco. The response on iTunes & Spotify was very positive so with a move to Seattle Josh continued recording songs at London Bridge studio with producer Geoff Ott. In June of 2022, Josh was invited to play The Bourbon Room in Los Angeles. He asked nephew and guitarist Brett Hightower to join him and a different nephew, Noah Davenport to play the keyboard. They
picked up guitarist/drummer/ singer Jared Janzen and bass player Randon Davitt
was added. The opportunity to headline gave the band a chance to put the rock ‘n
roll proof in the pudding. It turned out to be a special night of drop-dead great
original music. Josh’s tunes draw from his love of bluesy rock, hard rock, and the
evolution of hard blues into the guitars of grunge and gentler, more acoustic-paced rhythm and story. Josh uses a Fender Stratocaster and a Gibson acoustic in the show. The performance is a journey of sometimes soaring and rhythmic rock and also lyrical pathos and harmonies. The band has new songs being recorded all the while. They are certainly grateful for the interest and excited to show audiences what they can do on stage.
READ MORE +