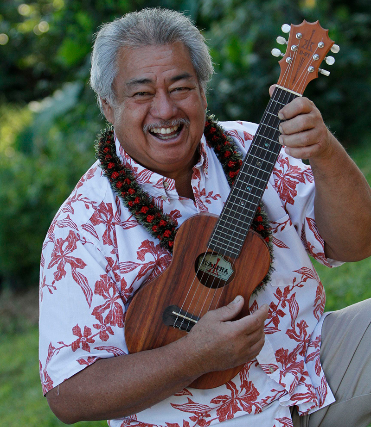 ‘Ukulele virtuoso Herb Ohta Jr is one of today’s most prolific `ukulele masters. Influenced by jazz, R&B, Latin and Brazilian music, he puts his stamp on Hawaiian music by pushing the limits of tone and technique on this beautiful instrument. His natural talent and superb playing have earned him 7 Na Hōkū Awards, including 2021 ‘Ukulele Album of the Year.

Sonny Lim, a member of Hawai`i’s famous musical Lim family, was born and raised in the heart of Hawaiian cowboy country on Hawai`i Island. Sonny’s father was a paniolo at Parker Ranch and Sonny also worked at Parker Ranch for 23 years. Music was a part of paniolo life and keeping with tradition, Sonny’s parents taught their children to play a variety of instruments. Sonny was introduced to ki ho`alu as a child watching Gabby Pahinui perform at a lu`au in Kohala. Sonny’s biggest inspiration and influence came at age 12 from well-known slack key guitarist and family friend, Uncle Fred Punahoa. Punahoa took interest in Sonny’s playing and spent several weeks living with the Lim family in Kohala to teach him. Sonny’s professional career began as a teenager when he commuted to Oahu from Hawai`i Island to perform with the Makaha Sons of Ni`ihau.

This is a 21+ Event, All Ages with Parent
There is a Food/Beverage minimum at all tables. “Virtuosic keepers of a cultural flame”  --The New York Times